What Are the Advantages of Electric Bikes

In a systematic energy flow comparison, a grid-charged battery driving an electric motor will provide mechanical energy about ten times more efficiently than a human eating a typical diet. For personal travel between 5 and 30 miles per day, the electric bicycle offers the lowest environmental and personal monetary cost, usually without increasing travel time. 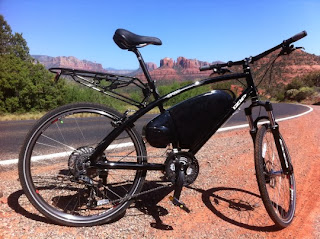 1. Hill Climbing :
That may sound obvious, but it's the primary advantage. A good electric bike effectively flattens hills, increasing your average speed and eliminating the 'groan' factor when a gradient comes into view. You can expect to climb hills of 1 in 10 (10%) on an electric bike with ease, and clear a maximum gradient of 1 in 7 (14%) or much more. In hilly country, the effect is nothing short of miraculous.

2. Safety :
It sounds unlikely, doesn't it? But the mathematics is compelling. Think of a steep and busy road, with cars climbing at 30mph. If you previously slogged up the hill at 6mph, but can tackle the same gradient at 12mph with an electric bike, you will see 33% fewer cars, and they will pass you at 18mph rather than 24mph. Or at least, we think that's correct.

3. Faster travel :
In theory a car can average a high speed, but in practice speed often falls below 10mph in cities. The problem is congestion - motorcycles get around this to some extent, but they're still confined to the road network. An electric bike can maintain a higher average speed than a bicycle but take advantage of the same network of cycle facilities, giving access to routes that cars and motorcycles cannot reach. The result is often a faster door to door journey time than any other mode. And by taking advantage of the cycle network, but eliminating hills and headwinds, electric bikes are often the most consistent mode of travel.

There are lot of advantages in a electric bikes. If you can feel this and want to buy a electric bike today, just go to Farbike.com and make your order with the best price.